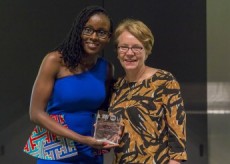 The 2018 Michael Elliott Award for Excellence in African Storytelling

The International Center for Journalists (ICFJ) in collaboration with ONE and the Elliott family seek entries for the 2018 Michael Elliott Award for Excellence in African Storytelling. In its second year, this prestigious award will honor an up-and-coming journalist in Africa who tells important stories through quality reporting.

Mike served as a distinguished editor at The Economist, Newsweek and Time before becoming CEO of ONE. Last year, he had spoken of his dream to establish an award that would bring together his belief in great journalism with his commitment to progress in Africa.

This award, given in Mike’s name, will provide the winner a $5,000 cash prize to pursue an in-depth reporting project. In a special study tour organized by ICFJ, the winner will spend time in U.S. newsrooms to learn new skills and share knowledge. In order to take full advantage of the study tour, applicants must speak English, even if they work in another language.

Our inaugural award winner Mercy Juma, a Kenyan broadcast journalist whose stories highlighted sensitive topics, such as unwed teen mothers living in Muslim communities, was selected from among 354 applicants. Her reporting brought to life the stories of often-voiceless Kenyans who face difficult human challenges and aim to overcome them.In her award-winning story, “Teen Mums of Kwale,” she tells of primary school girls whose families make the controversial choice to let them use contraceptives even though the practice is taboo in the Muslim communities of Kenya’s Kwale County. The reason for going against tradition: Their unmarried girls need schooling, not more unwanted pregnancies, if they are ever to rise out of poverty.

We invite you to submit your application if you meet the criteria – and please spread the word.

Eligibility:
● The contest is open to up-and-coming, English-speaking journalists working in Africa for print, broadcast and online news media.
● Applicants must have no more than 10 years of journalism experience.
● Applicants must submit one published story that reflects top-notch storytelling about important issues.
● The submission can be a feature story; an in-depth, investigative or explanatory piece; or a multimedia report or documentary.
● The published story or broadcast must be submitted in English. Works in other languages must include English translations.

A distinguished international jury will select the winner.

About Michael Elliott:
A passionate storyteller with a gift for unraveling complex issues for his readers, Mike held top editorial positions at The Economist, Newsweek and Time. Under his guidance, those publications shone a light on global development issues and the people at their center. Among the stories that he helped bring to the forefront of the news agenda were the human toll of the 2004 Asian tsunami, which he reported on from the ground, and the deadly impact of diarrhea in Africa, to which he dedicated a Time magazine cover. For his services to international journalism, he was awarded an OBE (Officer of the Order of the British Empire) in 2003.

While at Newsweek, Mike interviewed Bono, helping to bring global attention to the rock star’s campaign to persuade governments to forgive the debt of developing countries. That first meeting led the way, 11 years later, to Mike’s decision to bring his passion for humanitarian storytelling to Bono’s ONE organization. As ONE’s CEO, Mike increased global membership and lobbied to expand electrical power in African countries and combat hunger and disease.

A longtime board member of the International Center for Journalists, Mike championed storytelling as a tool for empowerment. Even after leaving the media, he continued to emphasize the critical role of journalists in tackling poverty and disease by amplifying the voices of their victims. He reiterated this strongly held belief during a speech in July 2016 to mark his retirement as CEO of ONE, making an appeal to his fellow writers to shed light on the struggles of ordinary people. After reciting a poem by Derek Walcott on the tired feet of women lugging coal, Mike ended his speech with a wish for all “to give those feet a voice.”

More About the Program: