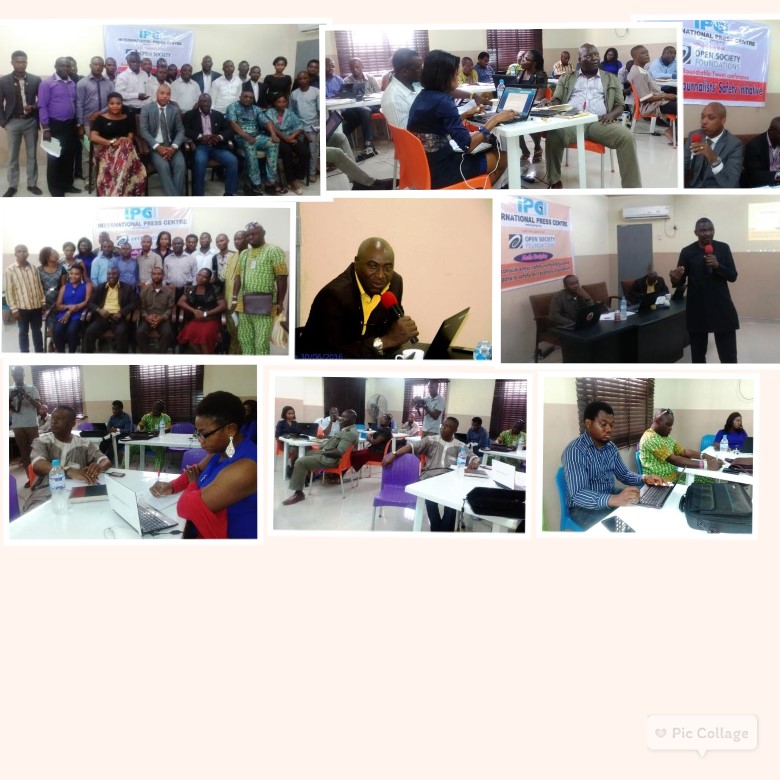 In continuation of its quest to promote the safety of journalists and seek better protection of their data and other resources from potential hackers, the International Press Centre (IPC) wrapped up its two-day capacity building programme on safety of journalists with a workshop on Thursday June 30 this year.

Beneficiaries of the training include more than comprising more than twenty male and female print, broadcast and online reporters.

On the first day of the capacity building program on June 29, two Lawyers, Messrs Adeyinka Olumide-Fusika (represented by Tomi Olagunju) and Mohammed Fawehinmi had led discussions at a media tweet conference (tweet-a-thon)/roundtable on the legal environment for the safety of journalists in Nigeria.

They had submitted to an audience that included journalists, freedom of expression advocates and civil society representatives that journalists assaulted in the course of duty should be entitled to legal protection because the Nigerian constitution mandates the media to perform major responsibility on behalf of the people.

That responsibility as stated in section 22 of the constitution is that the media should monitor governance and hold government accountable to the people.

The two day program was supported by the Open Society Foundation as part of the project on documentation, capacity building and advocacy on the safety of journalists.

Speaking on ‘Security for Journalists Reporting In Hostile or Unsafe Environments’, Aiyetan, Executive Director, International Centre for Investigative Reporting, noted that the global increase in social vices such as terrorism, cyber crimes, corruption, impunity and failure of the justice system have combined to increase the risks faced by professional journalists across the world.

“30 journalists are killed yearly around the world, 150 journalists are in jail, many without charges filed against them, 35 journalists in different parts of the world are missing, hundreds are threatened, harassed or attacked and many have their phones or email addresses intercepted”.

According to him crime and corruption are the most dangerous bits for journalists since thirty-five percent of journalists killed since 1992 covered crime and corruption. But he was quick to add that journalists covering terrorism, armed conflict, riots, civil disturbances, natural disasters, fire, accidents and epidemics have also faced threats hence they too should take their safety seriously.

Aiyetan argued that media owners have major responsibility in the protection of journalists and therefore charged them to provide reporters with basic protection tips, proper training and risk assessment tools when sending them into hostile or unsafe environments.

He however stressed that individual journalist should assume responsibility for their own safety by always being armed with means of identification and first aid kits while ensuring that they conduct proper research and security assessment before proceeding to report in hostile environment.

Offering some other safety tips Mr. Aiyetan said they include self protection, keeping away from the scene of a terrorist attack, maintaining peace with security agencies; carefully approaching traumatized or agitated survivors of disasters, avoiding working alone on dangerous assignments, donning special vests or helmets, keeping mobile phones charged, keeping contact with editors and in terms of war, understanding the rules.

On the question of whether or not a journalist should get embedded with security agencies while covering war or crime, Aiyetan submitted that both have implications. “Getting embedded will grant journalist exclusive access to frontline battle stories, but such journalist stands the risk of being killed in battle or can be arrested and detained as a prisoner of war. But as an independent reporter the reporter will have a broader perspective of the war, because such reporter is reporting from a safe distance, better still, such a reporter will be more independent in his reportage because he doesn’t owe anybody a favour and will in case of arrest be treated as a civilian; but such a reporter might not have enough access to report what really happens in the battle ground or the frontline”.

Aiyetan equally touched on how sexual harassment or violence in the course of duty constitutes a safety issue noting that a report by the CPJ in 2011 shows that nearly 50 journalists said they had been victims with some of the acts perpetrated by men in positions of power.

He therefore asked journalists to be cautious and avoid wayward dressing that could be exploited by sexual perverts.

CPJ’s Nkanga while introducing his first submission on “A Free and Safe Environment for Journalists” likens journalism in Africa to walking through a mine field at midnight but quickly added that this should not necessarily be the case.

He emphasized however that a journalist needs to be bold because journalism is about asking questions, exploring a topic of public interest that might reveal secrets or uncover an issue shrouded in silence, bears witness to and investigates ideas as well as facts and events.

Nkanga decried the way and manner some unscrupulous people in position of authority hack into journalists’ gadgets to have access to their data and listen to their conversations.

He equally lamented that the Digital Rights and Freedom Bill in the Nigerian National Assembly, which provides for the control and regulation of surveillance and lawful interception, has passed first reading in the House of Representatives, despite being a threat to media freedom. He urged journalists to fight such contemptuous bill.

On the specific issue of protection of information and data, Nkanga enjoins journalists to use protected means of communication including but not limited to having strong passwords, email encryption and use of secure web platforms.

On the other hand he enjoined journalists to horn their investigative skills by watching investigative series in the form of documentaries, videos, movies etc, which would enable them to use their five sense organs in during investigations in a way that they do not make assumptions that could prove costly.

All said, both Nkanga and Aiyetan told the participants drawn from such sensitive beats as investigation, crime, judiciary, business, features etc, never to forget the fact that much as it is desirable to investigate all stories of public interest, no story, in the final analysis is worth the life of a journalist.

In summarizing the essence of the capacity building program for which he reiterated IPC’s gratitude to OSF, Director Lanre Arogundade said: “In IPC, we want to make every journalist a better journalist. Its only when you are a better journalist that your professional future is secured more so as journalism pays today than it was in the past. It is only when you are professional that you will start reaping such dividends”.

Among the participants at the interactive forum was Gbenga Adewoye of AIT/RayPower who the previous day was battered alongside another colleague Adebisi Onanuga of The Nation newspapers, by a prison warden who was said to have been incensed that the two attempted to take the photograph of a convicted person at the Ikeja High Court premises in Lagos.

Barrister Tomi Olagunju, an activist lawyer, said the pen remained a potent weapon mightier than the sword in any society although there would always be constant conflict between people who want to hide something and people whose profession requires them to expose hidden things.

He noted that section 39 of the 1999 constitution gives the right to journalist to peep into places, gather information and publish it in as much as such information is objective. He argued further that a journalist that is sued for slander or defamation can seek redress under section 22 of the same constitution which imposes on the media the obligation of monitoring government and holding it accountable to the people.

Olagunju explained that although chapter 4 gives a generic protection for the fundamental rights of all Nigerians there are still laws that may turn out to be landmines for journalists.

“Journalist are predisposed to some specific dangers in the cause of their duties such dangers include law of seditions, criminal, libel and official secret act; all those laws are enacted to prevent journalists from attaining the objectives of their profession and therefore should be challenged by journalists”, he submitted.

“If you publish something that you are convinced is correct and you are being victimized for it, the labour law will protect you.  When you are prohibited not to publish an article which you see as genuine, and you went ahead to publish it for the national interest and you are being victimised, you can seek redress under the labour law”. Olagunju said any journalist who gets battered in the course of duty should report to appropriate authorities including the police or their Lawyers as the case may be.

He called for greater action on the part of the unions representing journalists anytime a journalist is subjected to attack while newspapers should also always give such attacks prominence on their front pages to discourage the perpetrators or potential ones. “If about six national newspapers condemned such attack on their first page the next day, the rate of attacks on journalist will be reduced”, he asserted.

In his own opinion the right of the public to know should be deemed as being more important than the fundamental human right granted individuals to their privacy.

Barrister Fawehinmi equally reiterated the necessity for journalists to take their issues more seriously through solidarity noting that it is only the strong that survive while the weak would die.

He agreed with Olagunju that a journalist who is attacked while doing his or her job according to the ethics of the profession should not hesitate to sue the local government chairman, the state government or the federal government for redress depending on the location and circumstances of such attack.

Another Lawyer, Bolaji Olumide urged journalists to be objective while covering court proceedings.

Director of IPC, Lanre Arogundade said about sixteen journalists have so far been killed in 2016 noting that the affected covered such beats as  corruption, crime, human rights, politics, etc according to the Committee to Protect Journalists.

He added that at least six journalists have been killed in Nigeria in circumstances directly related to the insurgency by the Boko Haram terrorist group.