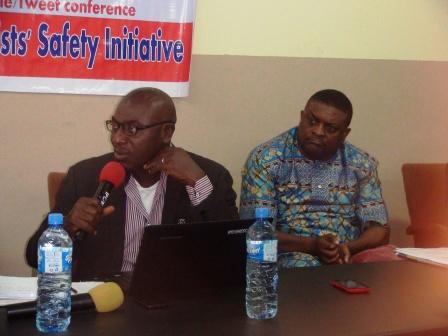 In the light of growing attacks and assault on Journalists in the course of carrying out their professional duties, journalists have been urged to seek the provisions of the law to enforce their fundamental human rights when they are attacked, harassed or assaulted in the course of duty. Two human rights lawyers; Barrister Adeyinka Olumide-Fusika, Managing Partner, Citipoint Chambers and Barrister Mohammed Fawehinmi, Lead Partner, Mohammed Fawehinmi & Co made the call during an interactive round table between journalists, civil society activists and legal experts on safety of journalists’ in Nigeria.

Speaking on the theme, ‘Safety of journalists in Nigeria – The challenge of an enabling legal environment’, Barrister Tomi Olagunju, who represented the lead speaker, Barrister Olumide-Fusika, described journalists’ pen as a potent weapon which is mightier than the sword because the pen of the journalist is capable of exposing people who have things to hide. According to him, the obligation of journalism embraces informing the citizenry “which comes in conflict with those who have things to hide thereby creating a sense of insecurity for the journalists, whose duty is to expose hidden information for the common good.” He noted that chapter 4 of the 1999 constitution has a body of protective rights that protects every Nigerian from molestation, harassment and intimidation.  He however stated that the protective remedy for the Nigerian Journalists is in section 39 of the Nigerian constitution, under the fundamental human rights as captured in chapter 4 of the Nigerian constitution.

He affirms that there are constitutional provisions that guarantee the protection of Nigerians under the law.  “Physical protection under the law for journalists’, like every other Nigerian is guaranteed by law, but whether a journalist whose right has been violated wants to pursue that right is another”, he said. “If you have published something you are convinced is correct, and you are being victimized for it, there are laws to protect you. When you are battered by anyone, report to the nearest police station and if you are molested by a police officer, report to a lawyer”, he advised.

Barrister Mohammed Fawehinmi in his contribution lamented that journalists are not often supportive of each other in fighting their own cause. “One thing with Nigerian journalists’ which I don’t like is that when they see someone putting every single effort they have to get what is rightfully theirs, you hail them, but when it’s their turn, they back out and say they can’t go through what it takes to get redress”, he said, adding that “it is only the strong that survives, the weak die”. Affirming that those in authority are to protect the lives of every citizen, he noted that once journalists have done their job according to the ethics of the profession, they need no fear any intimidation. “ When you are attacked doing your work even if your editor is not supporting you, you can take the risk by consulting your lawyer to either sue the local government chairman, the state government or the federal government, on the losses and injuries sustained”, he said.

Earlier in an opening remark, Mr. Lanre Arogundade, Director, International Press Centre (IPC) Lagos, organizers of the programme noted that the round table, supported by the Open Society Foundations (OSF), is part of the Nigerian Journalists’ Safety Initiative (NJSI), being implemented against the background of continued violations of journalists’ rights in Nigeria through attacks, arrests, abductions, etc, and the imperative of ensuring higher safety consciousness for journalists to mitigate the risk and exposures of journalists to all forms of attack.