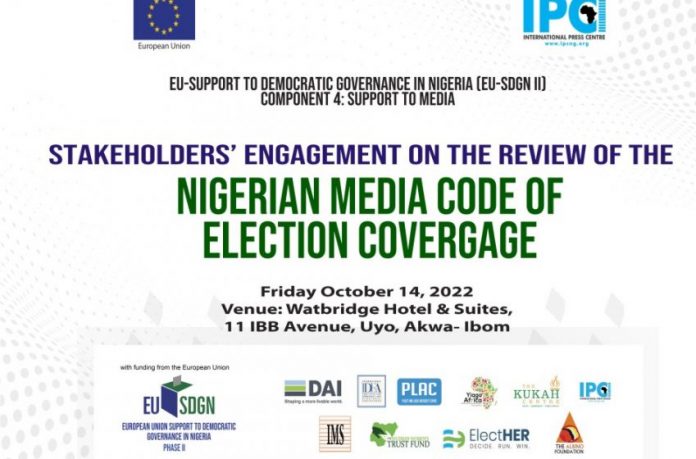 Today, Friday October 14, 2022, The International Press Centre (IPC), implementing partners with the Institute for Media and Society (IMS) under component 4 (Support to media) of the European Union Support to Democratic Governance in Nigeria-Phase 2 (EUSDGN II) project is holding a one-day stakeholders’ meeting on the update of the Nigerian Media Code of Election Coverage in Uyo, Akwa Ibom State.

The roundtable is one of the activities aimed at fulfilling the objectives of Component 4 (Support to media) of the European Union Support to Democratic Governance in Nigeria-Phase 2 (EUSDGN II) project, being implemented by IPC in partnership with the Institute for Media and Society (IMS).

IPC notes that in line with the overall goal of the media component under EU-SDGNII to “Support the consolidation of democracy in Nigeria with the media (broadcast, print and online media) helping to facilitate the key ingredient of credible elections through engagement and professionalism in coverage and reportage of the electoral processes”, it has championed the development and dissemination of the Nigerian Media Code of Election Coverage as an industry-driven self-regulatory guideline for election reporting since 2015.

Harmonised with the specific objective of ensuring that, “The Media, including New and Social Media, provides fair, accurate, ethical and inclusive coverage of the Electoral Process”, IPC also spotlights that the update of the code which in 2018, was endorsed by all the major media professional bodies and associations in Nigeria, as well as over 200 media organisations, has been instrumental in engendering professional reporting of the Nigerian electoral processes.

The Executive Director, IPC, Mr. Lanre Arogundade in a statement stated that, “Ahead of the 2023 elections, it has become imperative to not only update and re-produce the code in line with the overall goal of the media component of EUSDGN II, but to additionally deliberate on enforcement mechanisms to ensure compliance by journalists and media institutions”.

Mr. Arogundade, also added that following the review, the code will be re-published and widely distributed with availability in many more online media, to broaden the scope of distribution beyond the milestone that was achieved in 2018.

He also said that IPC expects the reviewed and updated code to provoke further stakeholders’ commitment to create an enabling atmosphere for hitch-free coverage of their activities.