To mark this year’s World Press Freedom Day, a gathering of media professionals at a conference in Lagos has stressed the need for journalists working online to understand the provisions enshrined in the Digital Rights and Freedom Bill in order to enhance the performance of their work.

The panelists frowned at the indifference of many media professionals to a law which is designed not only to guide their practice but ultimately affect the survival of their business. 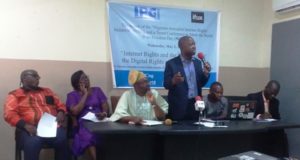 Journalists have also been advised to brace up to confront the digital challenges of the 21st century and seize the initiative from the array of poorly trained persons who are making hay from the media space on the Internet. “Many of our colleagues need to shift away from a bus stop that has long been moved away to another location”, says Mr Taiwo Obe, founder, Journalist Clinic.

Recounting his frustration about many media practitioners in Nigeria who opted to “stand at a point while the world was moving”, the acclaimed media trainer said “We cannot blame others for taking the initiative while we stood aloof.

“Media consumption habits were changing but we chose to stand at a long discarded bus stop. Many of us are whinning and bellyaching about some untrained persons with some ideas about the workings of the Internet taking over the media space but we have opted to watch idly without responding to the changing times”, posited Obe, who convened a summit on “Functional Social Networking for Nigerian Journalists” in 2014 which brought together many senior practitioners to appraise the response to the digital challenge.

Delivering a keynote address titled “The Power of the Media in the Internet Age”, at the conference hosted by the International Press Centre (IPC) with support from the International Freedom of Expression (IFEX), Obe who cut his professional practice at The Guardian newspaper and defunct This Week magazine, advised journalists to beef up their social media presence as a way of further oiling their practice. Recalling the example of a senior journalist who then had no Facebook, LinkedIn or tweeter account, it was his view that any journalists who opts to be what he perceives as a “digital alien” cannot survive the changing times. 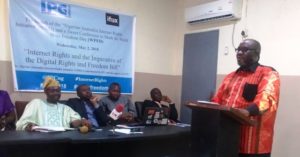 Also speaking at the event, Mr Lekan Otunfodunrin, Managing Editor Online, The Nation newspapers, admonished journalists to join the campaign and advocacy for the Digital Rights Bill now awaiting the assent of President Muhammadu Buhari. Otunfodunrin who spoke on the topic “Protecting the Internet Rights of Journalists and Bloggers”, says “We need to know what the Digital Rights Bill is about and press for the assent of the President to make it an Act”.

While calling on journalists to endeavour to carve a niche for themselves as they explore the Internet by working on specialised areas and subjects that will drive traffic to their website, he advocated for media houses in Nigeria to evolve a social media policy that will guide the engagement of their editors online.

“How can you be trustful of a political editor for instance who has already taken sides with one of the political parties or candidate?”, he queries, arguing that the prevailing situation particularly on facebook which is inundated with many editors openly taking sides against one political party or candidate or the other does not augur well either for journalism practice or the independence of the media.

Presenting the synopsis of “Issues in frameworks, freedom of expression and internet rights in Nigeria: A baseline research by the Nigerian Journalists Internet Rights Initiative (NJRI)”, Dr Tunde Akanni, Lecturer, School of Communication, Lagos State University (LASU), says the Cyber Crime Act of 2015 is more punitive and negates the development of the media space.

Discussing the provision of freedom of expression as contained in the Universal Declaration of Human Rights, the Universal Covenant on Political and Social Rights, the African Charter of Human and Peoples Rights and the ECOWAS Treaty, he calls for collaboration amongst media colleagues both in West Africa and beyond to ensure that freedom of expression is not encumbered by dictatorial tendencies.

While calling for networking with the Nigerian Internet Regulation Authority (NIRA) on the creation of a harmonious environment for the thriving of the media space online, he commended many media publications for adopting the .ng domain name which shows that their operations are based in Nigeria. Akanni, a former journalist at the defunct Concord newspapers however berated many government agencies that are still shunning the .ng domain name to take a cue from this noble example.

Recalling how he was hauled into detention under the military government of General Sani Abacha under the 1961 Sedition Act because of a press release, the communication scholar called for the review of laws setting up the Nigerian Broadcasting Commission which in his words is “constituted more like a dictatorial institution without any representation from the civil society”.

Executive Director, Paradign Initiative (PIN), Mr Gbenga Sesan who made a presentation on “Internet Rights and the Imperative of the Digital Rights and Freedom Bill”, says the advocacy for the law is the product of networking across different continents since 2016 which is meant to ensure that the promotion of freedom of expression online is not stultified.

Pointing to the case of the arbitrary shutting down of 21 websites under the Cyber Crime Act on the grounds that they were used to promote the cause of Biafra and the arrest of 15 bloggers, Sesan who was represented by Mr Adeboye Adegoke, programme manager, Digital Rights, PIN canvass for the signing of the Digital Rights and Freedom Bill by the President to create a friendly space for media practice and freedom of expression.

Mrs Yinka Shokunbi, Managing Editor, HealthStylePlus Online who shared her experience as a blogger on health issues advised journalists to ensure they have quality content to offer online. “the quality of what you put online determines your traffic and how seriously people will look at your work”, she quips.

IPC Programme Manager, Mr Sanmi Falobi says his organisation convened the conference to promote collaboration on the safeguard of the online media space. “We need to safeguard the online against threats. It is important to ensure that there are no institutional restrictions for the online journalists”, he notes.

Chairman of the Nigerian Union of Journalists (NUJ), Lagos Branch, Dr Qasim Akinreti who moderated the event asked media professionals to ensure that they engage in constant training and retraining while preparing for the challenge of the future. “When I left the shores of Nigeria 16 years ago for my Masters programme in Online Journalism in the UK, many colleagues were asking me what I was going to do with that but you can now see how that has changed my status”. Akinreti says.

He advised media houses to ensure that their online stories are written in a different format. “I’ve observed that many mainstream publications think that their online versions are just another platform for stories published in their mainstream publications. This is not so”, Akinreti says asking journalists to always check the accuracy of what they put in the public space.