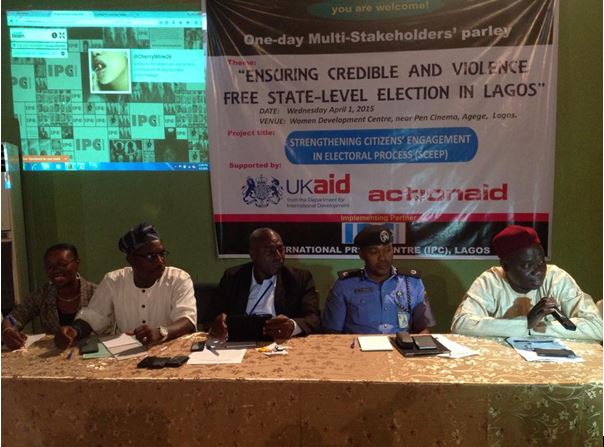 The multi-stakeholders’ parley was organized by the International Press Centre (IPC), Lagos-Nigeria under an election and democratic governance project tagged: Strengthening Citizens’ Engagement in Electoral Processes (SCEEP) being implemented across ten (10) States by ACTIONAID Nigeria, funded by UKAID through The Department for International Development (DFID).

The core objectives of the parley was to build consensus amongst the various stakeholders; the electoral management body, the security forces, the political parties and representatives of the media, civil society, youth groups, religious groups and the electorate in ensuring that the April 11, 2015 State level elections in Lagos is credible and violence free.

Following the presentations by the institutional stakeholders, there was a plenary session where other stakeholders from representatives of the civil society platforms at the parley engaged in robust interactive discussions as well as questions and answers on varying perspectives around the objectives of the parley.

The parley made the following observations:

Following the discussions at the parley, participants recommended as follows:

The participants acknowledged that the parley was timely and highly beneficial and commended ActionAid Nigeria and DFID for supporting IPC to organize the parley.