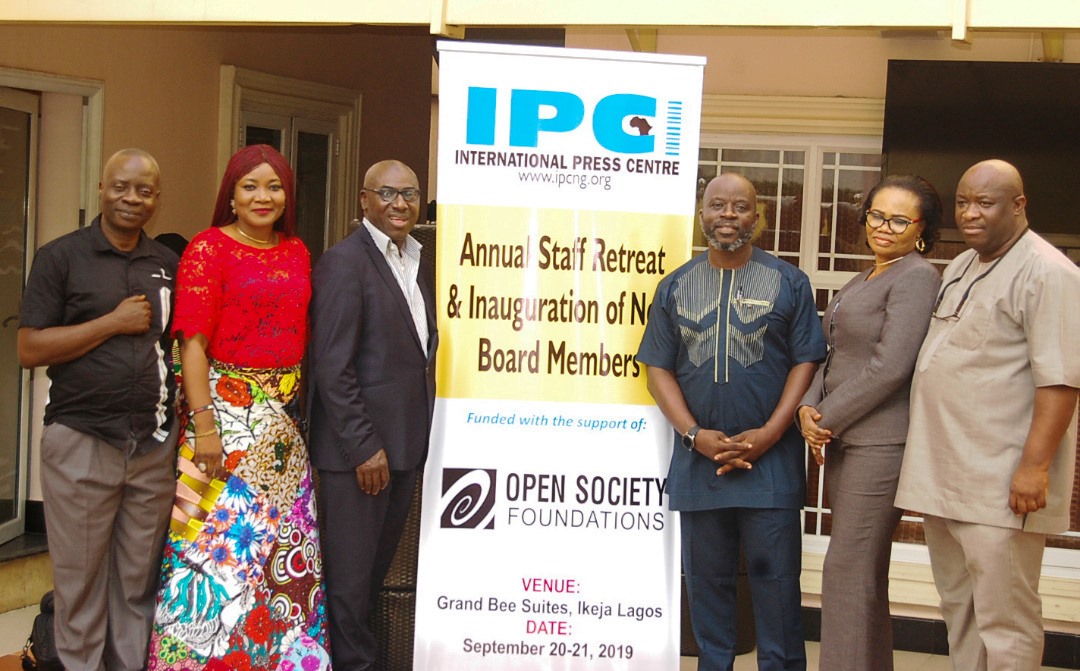 OGUNLEYE, DURODOLA AND IBANGA JOIN IPC’S GOVERNING BOARD, AS IT CLOCKS 20 YEARS

The International Press Centre (IPC), Lagos-Nigeria, has announced the reconstitution of its Governing Board, as the organisation prepares to mark the 20th anniversary of its establishment in October, 1999.

The announcement was contained in a statement by the Executive Director and  Secretary to  the Board, Mr. Lanre Arogundade, at the end of the organisation’s board meeting and annual staff/management retreat in Lagos on September 20 and 21, 2019.

According to Mr. Arogundade, both Mr. Edetaen Ojo and Mr. Wale Adeoye retain their positions on the Board as Chairman and member respectively, while Senator. Babafemi Ojudu, journalist, human rights activist and one of the founding Editors of The News Magazine and Special Assistant to the President on Political Affairs, voluntarily stepped down as a member on the account of his current political engagements.

Mr. Edetaen Ojo, a journalist and former Judicial Editor of The Guardian newspapers, is a renowned advocate for the right of access to information; He was honoured by the African Platform on Access to Information (APAI) with an award for freedom of information activism in 2011 while in 2017 he got the Lifetime Award for Journalistic Excellence of the Wole Soyinka Centre for Investigative Journalism. He is the Executive Director of Media Rights Agenda and Chair of the Board of the Media Foundation for West Africa of which IPC is national partner in Nigeria.

Mr. Wale Adeoye, an environmental rights activist, is an award winning journalist who has previously worked with The Punch and The Nation Newspapers. He is a four time winner of the Nigerian Merit Award (NMMA), first Nigerian to win the Steve Biko Scholarship instituted by Institute for Advanced Journalism (IAJ), South Africa and Alumni of the United Nations Institute for Research and Training, (UNITAR), Cologne Switzerland. A former CNN African Journalist of the year and winner of the Diamond Media Merit Award, he is the Executive Director of Journalists for Democratic Rights.

Mr. Lanre Arogundade, the founding Coordinator of IPC and newly designated Executive Director by the Board, has worked across the print, broadcast (Radio) and Online media including the National Concord, Vanguard newspapers, Panos Radio and Voice of America as a journalist. A media development specialist with passion for media professionalism and independence, he is also a media trainer, researcher, advocate for freedom of the press and author of ‘Media and Elections: The Professional Responsibilities of Journalists’.

“The scholarly, intellectual, professional and gender diversity of the new Board demonstrates the commitment and readiness of IPC to continue to deliver  on its mandate as Nigeria’s leading media development and press freedom organisation”, Mr. Arogundade said.

“We are also sure that given their vast experience and commitment to media professionalism, the board members will add value to our work in the areas of capacity building, media monitoring, campaigns, advocacy, networking and partnerships to advance the course of media freedom, media independence, safety of journalists and enhance the role of the media in development and democratic governance”, he added

According to him, the board members would be publicly presented during the forthcoming public lecture and airing of a documentary as part of a series of activities to commemorate the 20-year anniversary of IPC, the details of which will be announced soon.