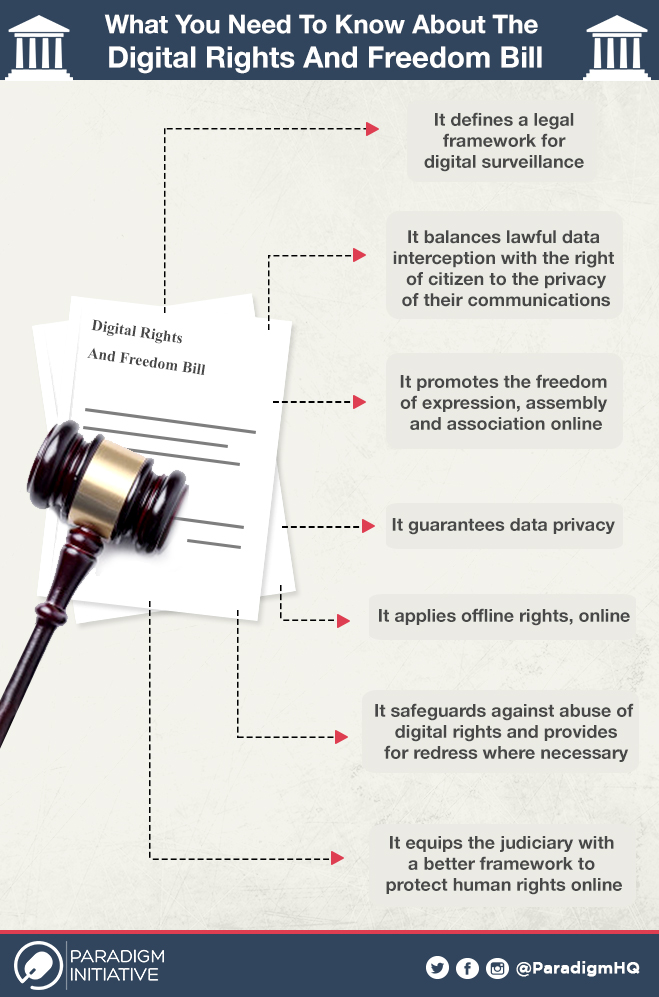 Media Rights Agenda (MRA) has called on President Muhammadu Buhari to sign the Digital Rights and Freedom Bill into law, saying “it will be a major legacy of his Presidency which will benefit millions of Nigerians for years to come.” Treading on the same path, the International Press Centre (IPC) said the bill when signed into law “will expand the frontiers of media freedom.”

In a statement in Lagos, MRA said by speedily assenting to the Bill, which was transmitted to him for signature by the National Assembly on February 5, 2019, President Buhari would be confirming his administration’s support for Internet freedom for Nigerians.

Praising the National Assembly for the swift consideration and passage of the Bill by both the House of Representatives and the Senate, MRA’s Executive Director, Mr. Edetaen Ojo, described the proposed law as “a strong piece of legislation that conforms strongly to global norms and standards and will effectively protect the rights of Nigerians on the Internet and in the digital environment.”

The Bill was passed by the House of Representatives on December 19, 2017 and similarly passed by the Senate on March 13, 2018 but was transmitted to the President on February 5, 2019 owing to a clerical error in the version passed, which the National Assembly had to correct.

Calling on President Buhari to assent to the Bill without delay and thereby demonstrate his willingness to protect the rights of all Nigerians online as they are protected offline, Mr. Ojo said: “The Bill provides a comprehensive framework for the advancement, protection and enjoyment of human rights on the Internet and in the digital environment, consistent with Nigeria’s regional and international obligations under various international human rights instruments, some of which Nigeria has led in bringing into being by co-sponsoring”.

Mr Ojo reminded the President that: “Nigeria played a leading role on the global stage in 2012 when it led in co-sponsoring the landmark Resolution on the Promotion, Protection and Enjoyment of Human Rights on the Internet at the United Nations Human Rights Council in Geneva, alongside Sweden, the United States, Brazil, Turkey and Tunisia, wherein it was affirmed that “the same rights that people have offline must also be protected online, in particular freedom of expression, which is applicable regardless of frontiers and through any media of one’s choice.”

He pointed out that the resolution brought Nigeria tremendous respect and acclaim from around the world and therefore urged the President to sign the Digital Rights and Freedom Bill “in keeping with the groundbreaking direction and guidance which this Resolution provided to the global community on human rights online.”

In addition, Mr. Ojo said, the Digital Rights and Freedom Act will help boost an innovative environment for Nigerians, as well as accelerate the country’s development in the digital age by allowing all Nigerians take maximum advantage of emerging opportunities, adding that this will be beneficial to the government and its efforts to ensure the economic growth of Nigeria including though its recent Enabling Business Environment initiative.

Mr. Ojo added that: “The Bill, when it becomes Law, will bring Nigeria’s domestic law, policy and practices with regards to the protection of human rights on the Internet into conformity with this international norm that we were central as a nation in developing and bequeathing to the global community.”

MRA also called on all other stakeholders, especially the media and civil society actors, the business community, the telecommunication sector etc. to lend their voices to the advocacy for speedy presidential assent and subsequently, ensure that they monitor its implementation and ensure that its provisions are applied in practice.

Mr. Ojo said if passed into law, “this piece of legislation will impact positively the personal and professional lives of all Nigerians who are connected to the Internet as well as those who will be connected in the future.” He added that “it is essential for all stakeholders to contribute to this process in every way possible including through advocacy, by writing about it, facilitating discussions and debates, playing their roles in ensuring its implementation and encouraging other members of society to do so as well.”

He also applauded Paradigm Initiative which led and coordinated the multi-stakeholder efforts that led to the development and drafting of the Bill and resulted in its speedy passage by the National Assembly, saying it has once again demonstrated the power of civil society to positively affect the fortunes of Nigeria and Nigerians.

IPC in a statement by its Director, Mr Lanre Arogundade said the eventual signing of the bill will be a watershed to the struggle for the expansion of internet rights and freedom. He also saluted the resourcefulness, sagacity and unrelenting campaign of the coalition that spearheaded the birth of the historic bill.

Paradigm Initiative, a social enterprise that has led the advocacy campaign in support of the Digital Rights and Freedom Bill, also commended the National Assembly and urged President Buhari to immediately sign the Bill into law.

A statement issued on Wednesday and signed by its Communications Officer, Mr Sodiq Alabi, quoted the group’s  Executive Director, Mr Gbenga Sesan, as saying: “We are happy the Digital Rights and Freedom Bill has now been transmitted to President Buhari. Mr President now has a unique opportunity to position Nigeria as a leader in rights-respecting laws in Africa by signing the Bill into law.”

On his part, Yemi Adamolekun, executive director of Enough Is Enough Nigeria, said: “It is significant that the gesture is happening on a day globally celebrated as the Safer Internet Day. There is now global attention on Nigeria to finish the important work it started by signing the Bill into law.”

The President will have 30 days from the day it receives the communication from the National Assembly to assent to the Bill.

Speaking on the development, Paradigm Initiative’s Digital Rights Program Manager, Boye Adegoke said: “To its credit, the Muhammadu Buhari administration has signed some landmark Bills such as the Not Too Young To Run Bill and the Disability Bill.”

“If signed, the Digital Rights and Freedom Bill will add to what appears to be a forward-looking disposition of the Administration to policymaking. What President Muhammadu Buhari does with the Bill will go a long way to define the administration’s disposition towards technology and its viability in improving the economic base of Nigeria,” Adegoke said.

A digital rights advocate and lawyer, Tomiwa Ilori, characterised the bill as a potpourri of protected freedoms in the digital age. “Nigeria will be at the cusp of history for being the first country to pass such comprehensive law with respect to securing human rights for the future. We have a golden opportunity of resetting digital policy across the board for human rights, we should take it,” Ilori said.

Commenting on the importance of the Bill, Angela Quintal, Africa program coordinator with the Committee to Protect Journalists said: “This Bill shows that it is possible for African governments to write regulations and laws that work for, not against, journalists. President Muhammadu Buhari should prove his commitment to Nigerian leadership on digital rights in Africa by signing the bill into law before the election on February 16.”