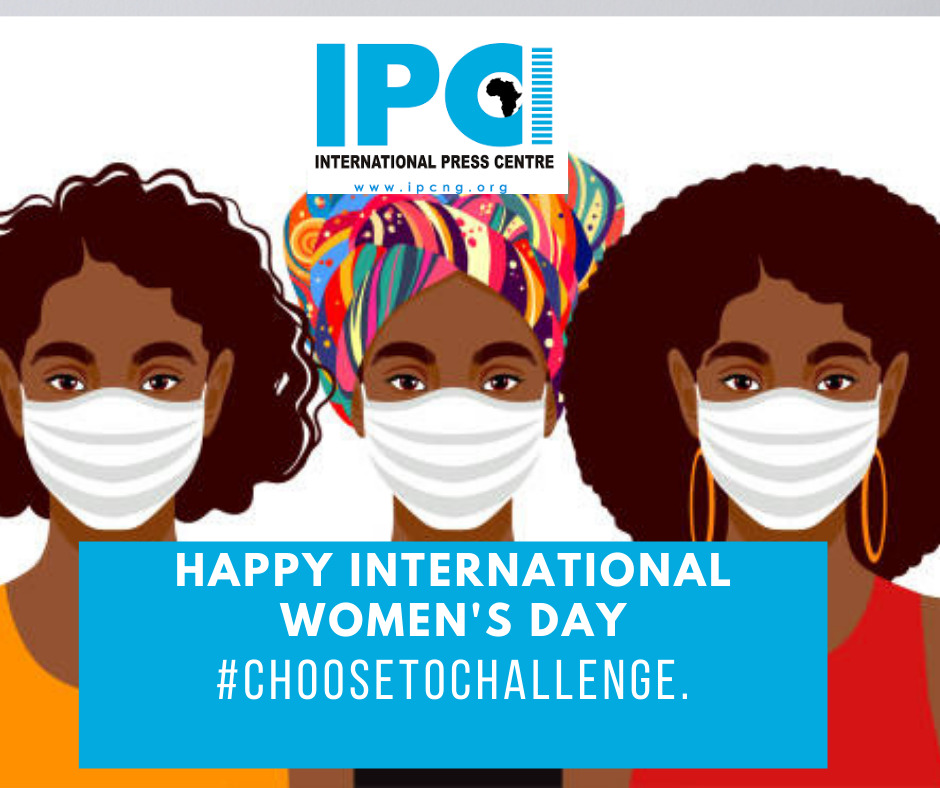 In observance of the International Women’s Day (IWD) 2021, the International Press Centre (IPC) Lagos, Nigeria has called on the government of Nigeria, policy makers, media, civil society groups and related stakeholders to uphold the obligations of achieving gender equality in political representation, effective participation of women in the electoral process and mitigation of gender bias and inequality.

IPC made the call in a statement by the Executive Director, Mr Lanre Arogundade to commemorate this year’s UN theme; “Choose To Challenge”, which accordingly is also focused on challenging gender inequality in government, workplaces, health care, sports and media coverage, etc.

According to the statement, IPC recognises that women’s political participation and gender equality are imperative as backed by several international and regional instruments such as the Universal Declaration of Human Rights (UDHR), the Convention on the Political Rights of Women (CPRW, 1952), the Convention on the Elimination of all Forms of Discrimination against Women (CEDAW, 1979) and the African Charter on Human and Peoples’ Right of 1981.

Mr. Arogundade lamented that despite well-meaning provisions, women still suffer some sort of gender bias and so it had become imperative for all stakeholders to put in greater efforts to challenge stereotypes and gender biases. He added that the level of women’s political participation in Nigeria is relatively poor as women who constitute about 50% of the country’s population still remain systematically alienated from politics and decision-making processes in the country.

“Women deserve to be integrated into the development wheel of society and so the government and indeed, all stakeholders should rise up to the challenge to ensure that women have a life and future free from stigma, stereotypes and violence. Especially in the face of pandemic, women need to be assisted in order for them to achieve a future that is sustainable, peaceful, with equal rights and opportunities for all”, Arogundade noted.

Mr. Arogundade while noting that political leadership remains a viable platform to break barriers also suggested that there should be concerted efforts to ensure needful reforms in the electoral system so that the hindrances to women participation in political leadership are done away with.

In promoting gender equality and women’s participation in politics, IPC therefore recommended the following, among others:
(i) Government should strengthen legal and policy frameworks to clearly provide for gender equality in political participation.
(ii) The National assembly should develop action plans that will systematically increase the proportion of seats held by women in national parliaments and local governments.
(iii) Journalists and media professionals should be gender sensitive in their reporting.
(iv) Civil societies should develop programmes that promote gender equality in elections, should commit to defining and supporting gender related sustainable development goal results in their strategic planning.
(v) Electoral stakeholders should implement procedures that prohibit or limit Violence Against Women in Elections (VAWE).