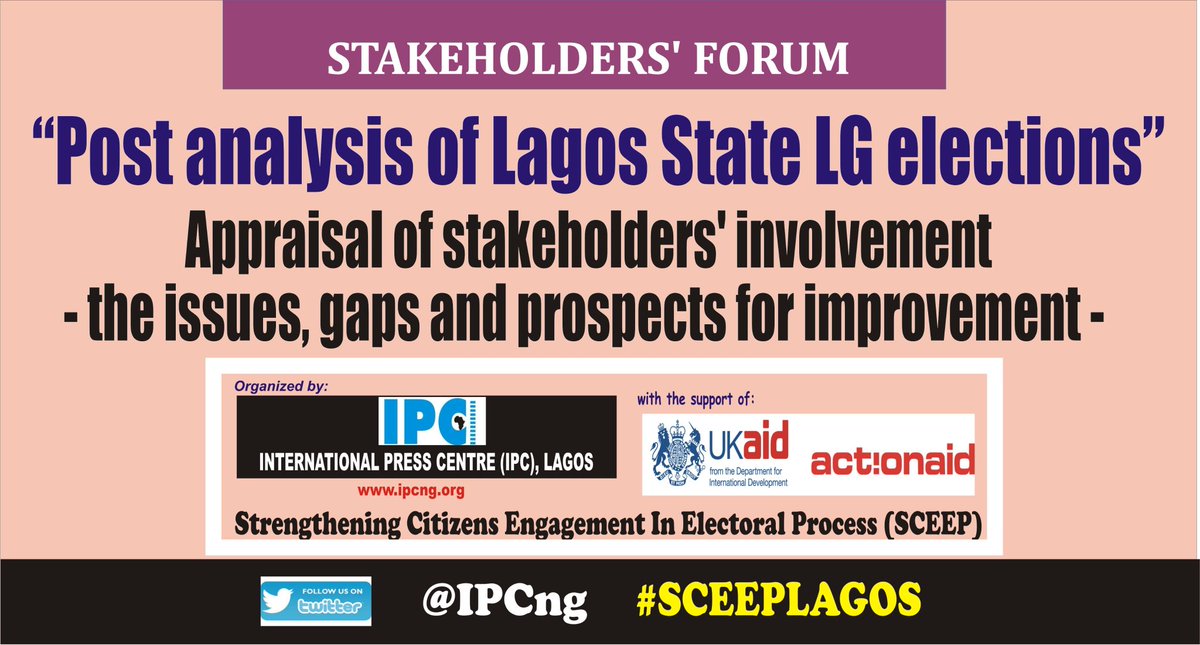 The event was organized in furtherance of series of citizens engagement programmes for community members from eighteen (18) communities across six (6) Local Government Areas (LGAs) of Lagos State, namely, Amuwo Odofin, Surulere, Shomolu, Ikorodu, Lagos Mainland and Ifako-Ijaiye under the Strengthening Citizens Engagement in Electoral Process (SCEEP) project, being implemented in Lagos by IPC and supported by ACTIONAID Nigeria and the UKAID through the Department for International Development (DFID).

Over 120 participants drawn from the communities as well as representatives of institutional stakeholders including the National Orientation Agency (NOA), the National Conscience Party (NCP), KOWA and ACCORD parties, election monitors/key CSO stakeholders, youth, women and People Living with Disabilities (PWDs) and the media attended the forum. Mr. Kehinde Bamigbetan, Special Adviser to Lagos Governor on Communities & Communications was special guest of honour while Dr. Abiola Akiyode-Afolabi, the Chair, Transition Monitoring Group (TMG), delivered the lead presentation on the theme, “Post analysis of Lagos State LG elections: Appraisal of stakeholders’ involvement- the issues, gaps and prospects for improvement”.

The objective of the forum was to assess stakeholders’ contribution towards the elections, identify the gaps and learn from the issues in order to have improvement in future elections.

In her paper, Dr. Abiola Akiyode-Afolabi, who is also the Executive Director of Women Advocates Research and Documentation Center (WARDC) gave an overview of the outcome of the monitoring of the elections. She said while it was good that the election was held there were issues with the legal framework, the conduct of the primaries, low participation, etc. Dr. Adewale Aderemi, Senior lecturer, Department of Political Science, Lagos State University (LASU) contributed to the presentation under the sub-theme, “Post analysis of the Lagos 2017 local government elections: Issues arising and way forward in advancing stakeholders role in deepening the electoral processes” and said the observations by Dr. Akiyode-Afolabi were worth addressing.

Following the remarks and presentations, participants during the plenary observed as follows:

Arising from the observations, participants recommended as follows:

Participants at the Stakeholders’ Post-Election Forum on Lagos State Local Government Elections expressed gratitude to IPC and its partners; ACTIONAID and UKAID through the Department for International Development (DFID) for supporting the organization of the forum.