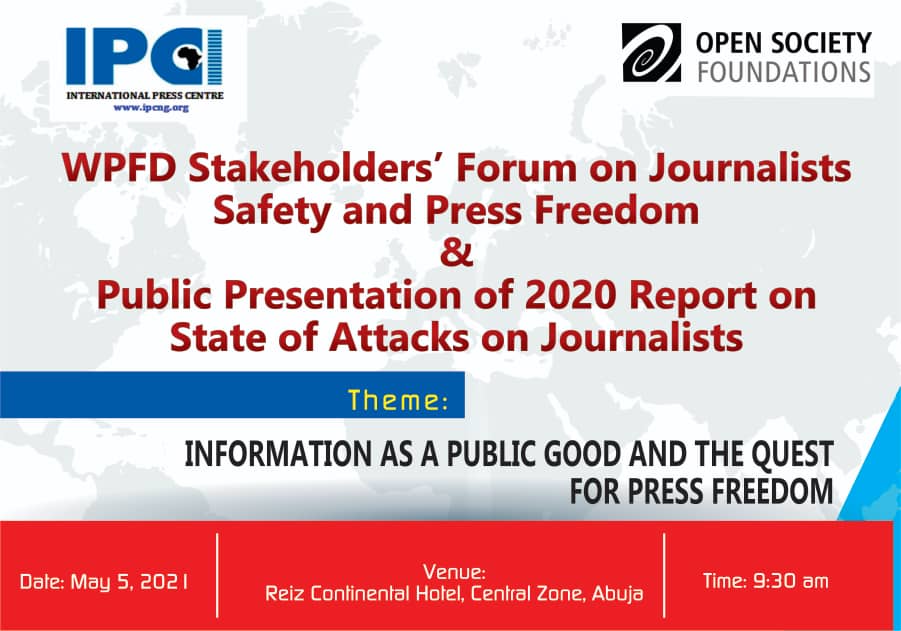 The International Press Centre, (IPC) Lagos-Nigeria, in commemoration of the year 2020 World Press Freedom Day (May 3rd) whose theme is ‘Information For Public Good’ convened a Stakeholders’ Forum on Journalists’ Safety and Press Freedom Limitations in Nigeria on Wednesday May 5, 2021 in Abuja.

The year 2020 WPFD marks the 30th anniversary of the Windhoek, Namibia global media conference on ‘Promoting an Independent and Pluralistic African Media’ from April 29 to May 3rd, 1991, the declaration of which led to the proposal for the adoption of May 3rd as WPFD by the United Nations following a proposal by UNESCO.

The Abuja forum was convened in continuation of IPC’s commitment to deepening engagement with media and relevant stakeholders on solution-driven approaches to the safety of Nigerian Journalists.

The keynote address was presented by a prominent social critic and Executive Director, Lux Terra Leadership Foundation, Rev. Fr. George Ehusani with journalists from the print, broadcast and Online media in attendance.

The Executive Director of IPC, Mr. Lanre Arogundade, in his welcome remarks, announced the institution of a Foundation for the Safety of Journalists by IPC to, among others:

Report on attack on Journalists in 2020

The IPC report on the State of Attacks on Journalists in Nigeria in the year 2020 was also released at the event. The report, presented by IPC’s Safety Alert Desk Officer. Mrs. Melody Lawal, revealed that forty-eight (48) journalists and eight (8) media outlets were attacked in 2020 with the perpetrators including security agents, paramilitary forces, political agents and unknown gun men. The report also cited the location and the nature of the attacks observing that many of them occurred during the COVID-19 lockdown and the ENDSARS protest.

Speaking on the theme: ‘Information as a Public Good and the Quest for Press Freedom’, Rev. Fr. Ehusani urged journalists, other media professionals and media organisations in Nigeria to wrestle and seize from the authorities and guard jealously press freedom. His words: “Freedom of any type is not cheap. It does not come on a platter of gold, as those who hold power often seek to intimidate, coerce unto submission and silence dissenting voices in the society. Thus, press freedom, as indeed the freedom of expression from which it ensues, will hardly every be simply given in our society or anywhere else”.

Fr. Ehusani also submitted that the “media is a cornerstone of a free society” adding that “the freedom to source information, to process such information, and to disseminate it, is critical for the nurturing and sustenance of a free, democratic and prosperous society”. In this regard, he said that the biggest challenge to the people’s right to know has been the refusal of authority systems at various levels of the state to allow international covenants on press freedom and freedom of expression to flourish citing as example the existence of laws like The Official Secrets Act 1962 in Nigeria.

Both the report the report on attacks on journalists and the media in Nigeria in 2020 and the keynote address elicited responses and contributions from the discussants and participants.

The participants observed that:

Following the observations, the participants recommended that: