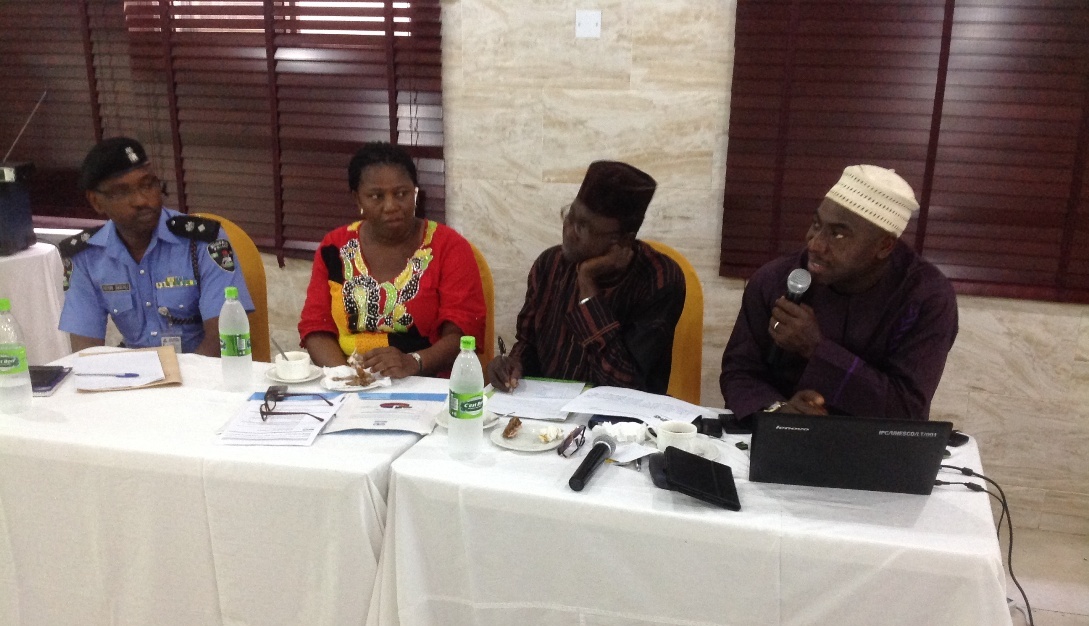 1. INTRODUCTION
The one day experts’ meeting organized by the International Press Center (IPC) Lagos with the support of UNESCO Regional Office in Nigeria was a landmark development in the quest to document, raise consciousness and propose solutions to attacks on journalists while addressing other safety issues affecting effective journalism practice.
The meeting had in attendance about thirty-five experts drawn from prominent media institutions, bodies and associations as well as the law enforcement agencies. Also present were female and male editors in print and broadcast media outlets including those reporting in the conflict affected areas of the North East.
Among those present were Julie Osagie-Jacobs, National Programme Officer/Communication & Information, UNESCO, Mr. Bayo Atoyebi, former Executive Secretary, Nigerian Press Council (NCP); CSP. Abayomi Shogunle, who represented the Force PRO; Louis Achi of the Nigeria Guild of Editors, (NGE) and James Uwem, representing the Nigeria Union of Journalists (NUJ).
The discussions were preceded by the presentation of the
Overview of the report of Baseline Audit on Safety and Security of Journalists in Nigeria
by the Director of IPC, Mr. Lanre Arogundade. Also presented were three other
papers were also presented including Media Handling of Gender Issues
in Contemporary Nigerian Conflicts by Dr. Ifeoma Dunu, Department of
Mass Communication, Nnamdi Azikiwe University, Awka; Professionalism
and ethics in reporting conflicts: perspectives on dealing with the
new challenges by Dr Sola Ishola of the Department of Peace &
Conflict Studies, University of Ibadan and Religious conflicts and media responsibility and the emergent challenge of Boko Haram by Dr Abubakar Mu’azu of the Department of Mass Communication, University of Maiduguri.
The presentations were followed by plenary sessions during which the experts exchanged ideas on contentious issues in conflicts and the safety of journalists.
2. OBSERVATIONS
The participants observed that:
• The safety of journalists seems to be on the downward trend as forty seven journalists were attacked between November 2014 April 2105, according to the baseline audit on safety of journalists which relied on information sourced from nine print media outlets;
• Attacks on journalists are mostly perpetrated by security agents, armed militia men, political party loyalists/thugs and unknown gun men;
• There has been no diligent prosecution of those responsible for various attacks on journalists;
• Journalists working in conflict prone areas especially the north east of the country have been exposed to physical sufferings and psychological trauma;
• Media outlets in the North East are sometimes vulnerable to attacks by terrorists;
• Media reporting of the Boko Haram crisis sometimes do not show sufficient understanding of the north eastern landscape and the enormity of the task of combating the terrorists; For example, Borno state has a bigger land mass than combined five states in the south while the Sambisa forest stretches from Nigeria to the East African region;
• There is the tendency for security agents operating in conflict areas to be hostile to journalists reporting such conflicts;
• There is absence of regular dialogue between media stakeholders and security agencies on the challenges of violent conflicts in the country;
• The gender dimensions of conflicts in the country are often under-reported;
• The reporting of conflicts poses many professional and ethical challenges and dilemma, which should be properly addressed;
• The media is not doing enough to report the factors that predispose parts of the country to conflicts.
3. RECOMMENDATIONS
The meeting recommended that:
• Journalists should in the course of reporting conflicts and other issues avoid compromising professional and ethical principles so as not to be seen as being biased by parties to the dispute; Allegations of bias could expose journalists to risk or danger;
• Media proprietors and the union/professional associations of journalists should put in place multiple insurance schemes as part of the welfare provisions for journalists; Journalists working in or reporting in conflict prone areas should in addition be entitled to special insurance schemes as they face higher risks of attacks, accidents, injuries and loss of life and property;
• Security agents should accept the obligation to protect and ensure the safety of journalists working in or reporting in conflict affected areas;
• Security agents should understand the necessity of attending to requests for information on conflicts from journalists; They not see such requests as constituting acts of hostility to the state;
• Security agencies and media professional bodies and associations should hold periodic roundtables to discuss issues in conflicts and the challenge of ensuring the safety of journalists; Such forum would also enable them to develop mechanisms for overcoming mutual distrust and suspicion;
• Journalists reporting in conflict affected areas should understand that security agencies are invaluable sources of reliable information and therefore should cultivate them in a professional and respectful manner;
• Media outlets and media professional bodies/associations should commit adequate resources to the training and re-training of editors and reporters on conflict sensitive reporting and safety in reporting conflicts;
• Journalists working in conflict prone areas must study and imbibe professional safety tips; They should avoid acts that could put their lives at risk;
• The reporting of conflicts should take into account the plights of women and children; Journalists should adopt the principles of gender sensitivity in reporting violent conflicts especially by avoiding gory or offensive details of violent acts against women and children;
• Journalists should adopt the principle of an injury to one is an injury to all, and therefore act in solidarity whenever in any one of them is subjected to harassment or assault by whosoever;
• Media managers/gate keepers must not allow their partisan or commercial interests to override good judgment in reporting conflict issues so as not to expose journalists reporting from the field to unnecessary risk or danger;
• The media should in line with its social duty and constitutional obligation hold government accountable to its responsibility to provide for the needs of the people and alleviate poverty, so as to discourage the resort to acts of terrorism.
Lanre Arogundade
Director, IPC
Tel: +234 (0) 8023186845 ,
Email: larogundade@ipcng.org, Twitter: @lanreipc l Skype: lanre.arogundade2