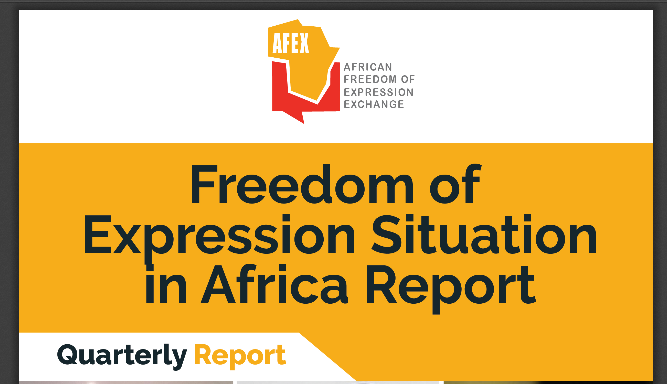 The African Freedom of Expression Exchange (AFEX) is a continental network of some of the leading freedom of expression and media rights groups in Africa that seeks to promote freedom of expression and human rights. AFEX is made up of fifteen (15) member organisations that are all members of the Toronto-based global free expression network, IFEX. As part of its free expression and human rights advocacy efforts, AFEX puts together periodic reports that seek to highlight incidents of freedom of expression (FOE) violations and related developments in Africa’s media landscape. The AFEX Freedom of Expression Situation in Africa Report for January –March 2019, covers incidents of FOE violations and related media developments recorded in 21 countries during the first quarter of 2019. A total of 77freedom of expression (FOE) violations recorded in 21 African countries. Nigeria recorded the highest number of FOE violations (16), a majority of which were recorded during electioneering period. Liberia, Zambia and Zimbabwe distantly followed with seven(7) violations each while Mauritania recorded five violations. Details of the violations recorded by AFEX during the monitoring period is provided in country-by-country analysis section of this report. Security agents were responsible for 40out of 77violations followed by political party affiliates and state officials with 14 and ten violations recorded respectively. The remaining violations were perpetrated by organized groups, unknown individuals, and media regulatory bodies of various countries. Although some of the violations recorded in the first quarter of 2019 received,to some extent, redress actions from various state and non-state actors, the level of impunity for a majority of the violations recorded was high. AFEX continues to urge stakeholders in their respective countries to adopt concrete steps towards promoting the safety of journalists and protecting the overall freedom of expression environment in Africa. The report concludes with key recommendations to state and non-state actors to work together in establishing a coordinated mechanism to tackle press freedom challenges identified in the various countries on the continent.