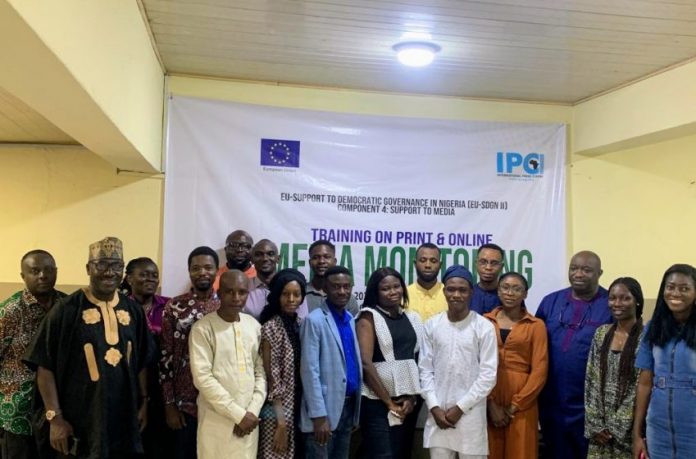 Are media houses able to promote the participation of women and minorities in the electoral processes and elections? And enhance media literacy of election officials and the public at large? Are media reports able to enhance electoral integrity and democratic development?

The imperative of answering these key questions is the major reason behind the monitoring of print and online media by the International Press Centre (IPC). To kick start the process, the organisation on Friday September 23, and Monday September 26, 2022 trained 12 Media Monitors to prepare them for the monitoring of the coverage and reportage of the electoral processes and the 2023 elections by the print and online media.

The essence of the 18-month activity that commenced on October 3, 2023, is to assess the level of compliance with professional and ethical standards by newspapers, including online ones, selected for the exercise.

The training of the monitors is one of the activities under component 4 (Support to media) of the European Union Support to Democratic Governance in Nigeria-Phase 2 (EUSDGN II) project, being implemented by IPC, along with its partner, the Institute for Media and Society.

The overall goal of the media component is to “Support the consolidation of democracy in Nigeria with the media (broadcast, print and online media) helping to facilitate the key ingredient of credible elections through engagement and professionalism in coverage and reportage of the electoral processes.” The specific objective is to ensure that, “The Media, including New and Social Media, provides fair, accurate, ethical and inclusive coverage of the Electoral Process.”

The trainees recruited in this new segment, expressed a high level of enthusiasm about the impact of the activity and actively participated in the training sessions. They were motivated to begin their new journey as media monitors.

The monitoring activity itself has started with a daily content monitoring, and analysis of 15 Nigerian national/regional newspapers print, including (The Nation, Guardian, Punch, Premium Times among others) and online news media (The Cable, Order Paper, Daily Trust among others), along with the INEC news website and twitter handles on the trends and issues in media coverage of the electoral process.

Among others, the monitoring is being done within the context of the expectation of the Nigerian Media Code of Election Coverage, which spells out the responsibilities expected of journalists and other media professionals at elections. The Media Election Code was endorsed by umbrella media professional bodies and associations, and close to 300 individual media outlets in 2018. It enumerates what journalists and media management should do to ensure social responsibility and integrity; equitable access for parties and candidates; media access for disadvantaged groups including women, persons with disability and youths; conflict sensitivity and the avoidance of hate speech.

It is expected that the media monitoring shall play a key role in the professional reporting of the electoral processes, as the gaps and shortcomings identified from media reportage shall form part of the indices of engagement with journalists and media managers for needed improvements in professionalism.

The IPC will achieve this by making use of the results to serve as instruments of engagement with journalists and media managers to address identified gaps and agree on measures for improvement, including evaluating the extent to which elections were fair in terms of freedom of expression by the media, voters and candidates; acting as an early warning system for elections-related violence; promoting the participation of women and minorities; and enhancing media literacy of elections officials and the public at large.

An earlier phase of the European Union (EU) funded programme, “Support to Democratic Governance in Nigeria” (EUSDGN I), kicked off in 2018, with the aim of contributing to the reinforcement of democracy by supporting the Nigerian government and key stakeholders, the Electoral Management Bodies (EMBs), the National Assembly, Political Parties, the Judiciary, Media, Civil Society Organisations and Security Agencies with the primary objective of fostering a more inclusive participatory and representative democracy in Nigeria.

IPC in their previous interventions within the EUSDGN Phase I programme, implemented a similar media monitoring activity, between the periods May 2018 to April 2020. The Final Report On The Monitoring Of Media Coverage Of 2019 Elections from twelve print and online newspapers; The Punch, The Guardian, Daily Sun, Vanguard, ThisDay, Nigerian Tribune, The Nation, Leadership, Daily Trust, Blue Print (online), The Cable (online), and Premium Times (online) identified that the media were not remarkably inclusive in their coverage of the 2019 elections as some constituents in the society were largely ignored. It further revealed that women, persons with disability (PWD) were among the groups that received little coverage from the media during elections.

It was also observed that there were remarkable cases of reports that were conflict insensitive, which were capable of inciting violence, the investigations revealed that while majority of the analysed reports met the required standards of sensitivity in reporting, a few did not meet the expectations, these reports were therefore adjudged insensitive.

The quarterly monitoring reports were reviewed and presented at media stakeholders’ roundtables to engender open debates and discussions with stakeholders on the thematic focus of the democratic and electoral issues published by the selected media, moreover the IPC used the quarterly reports of the monitoring exercise to engage with the media and other stakeholders.

The activity additionally documented the  Key campaign promises, of President Muhammadu Buhari, as the presidential candidate of the All Progressive Congress (APC) in the 2019 general elections, which was supposed to serve as a tool for engagement by the media in engaging the government in power.

Highlighting the importance of the media monitoring to elections management and democratic development, the Executive Director of IPC, Mr. Lanre Arogundade, said that “Against the background of the prevalence of misinformation and disinformation especially by political actors, all we are seeking to achieve is for the Nigerian media to contribute to the credibility of electoral information before, during and after the 2023 elections”.

The Project Manager, IPC, Mr. Sanmi Falobi noted that “the monitoring findings will help to determine if Nigeria media have been able to adhere to the required standards of reporting in promoting free and fair 2023 elections”.

According to the EU, the programme in its design was broadly targeted in response to the recommendations, of the EU Electoral Observation Mission and anchored on the priorities of the Nigerian government. These priorities were recently reinforced in the 2021 EU-Nigeria Joint Ministerial Roadmap.

They have stated that, in this new chapter expected to run from May 2022 to May 2027, the partners being funded are DAI, International Institute for Democracy & Electoral Assistance (IDEA), Independent National Electoral Commission (INEC), Policy and Legal Advocacy Centre (PLAC), Youth Initiative for Advocacy Growth and Advancement (YIAGA), KUKAH Centre, International Press Centre (IPC), Institute for Media and Society (IMS), Nigerian Women Trust Fund (NWTF), ElectHER, and the Albino Foundation.

Moreover, given the recorded success of Phase I, the subsequent programme aims to apply the lessons learned to enhance the programmatic focus and maintain the implementation of the EU’s priority in the field of democratic governance according to the Union.

In line with the EU’s programme’s alignment with the 2023-2027 electoral cycle, the EU-SDCN programme rests on the premise that the trajectory of successive elections will depend on continued reforms within the three arms of government (executive, legislature, and judiciary) as well as continued legislative and administrative support for varied stakeholders such as INEC, political parties, and security agencies.

Additionally, the EU-SDGN Phase II focuses on six (6) thematic areas. This differs from Phase I in that, whereas the earlier programme mainstreamed inclusivity principles for marginalised groups (women, youths, and PWDs) across the programme components, Phase II builds on this by both mainstreaming inclusivity and creating inclusivity as a standalone thematic focus.

This underscores the focus of the EU on this and enhances opportunities for the implementation of inclusivity issues across all thematic areas of the programme. Phase II also expands the definition of marginalised groups to include Nigeria’s expanding Internally Displaced Persons (IDPs).

The EU-SDGN Phase II is articulated through six thematic components;

Component 2: Support to the National Assembly

Component 3: Support to the Political Parties

Component 4: Support to the Media

Component 5: Support for the Participation of Women, Youths, and Marginalised Citizens Component 6: Support to Civil Society Organisations and other Non-State Actors

The latest chapter will be anchored on the priorities identified by the Nigerian government. It will also build on the lessons learned from the implementation of phase I of the programme (2017-2022), and the recommendations of the EU Election Observation Mission made after the 2019 General Election as well as those of the EU Election Follow-up Mission to Nigeria. More specifically, it will focus on six thematic areas of support: