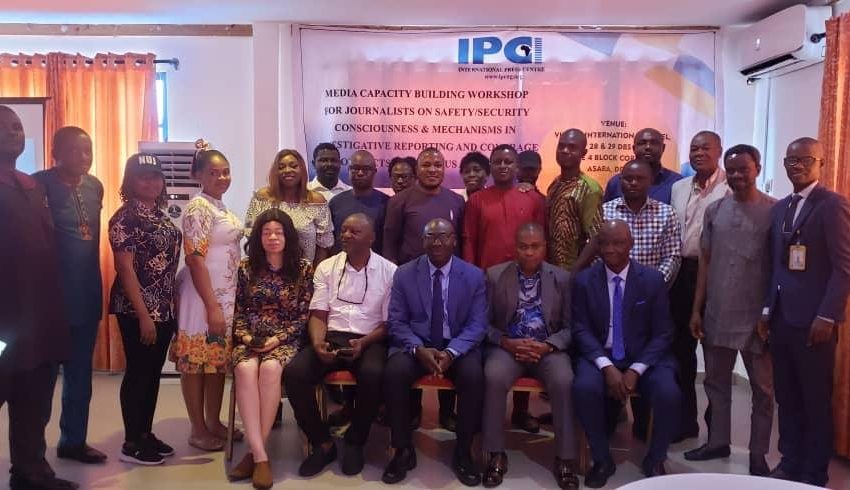 The two-day workshop was held against the background of increasing attacks on journalists and other media professionals by state and non-state actors with negative consequences for their physical and mental well-being.

The theme of the workshop, therefore, was ‘Safety/Security Consciousness Mechanisms in Investigative Reporting and Coverage of Conflicts/Dangerous Assignments’.

Held at Vienna Hotel, Asaba, Delta State, Nigeria, the workshop had in attendance 26 male and female print, broadcast and Online journalists from Anambra, Delta and Edo States who were taken through various lectures on entrenching ethics and professionalism, building safety and security consciousness and giving deserved attention to physical and mental health.

Four resource persons made presentations at the workshop. Mr. Peter Nkanga, investigative journalist and press freedom advocate facilitated the sessions on ‘Data and Digital Security & Related Security Issues in Investigative Reporting and Coverage of Dangerous Assignments’ while Dr. Majority Orji, Associate Professor of Mass Communication at Delta State University, Abraka made a presentation on ‘Investigative Journalism or Reporting: Understanding the Challenges & Possible Dangers’. Dr. Uzo Israel, represented by Mr. Moses Tingir, a Clinical Psychologist took the journalists through a presentation on ‘Attacks on Journalists, Mental Health Challenges and the Imperative of Effective Management’ and the Executive Director of IPC, Mr. Lanre Arogundade facilitated a session on ‘Stages/Phases of Conflicts, Roles of Journalists and Safety Challenges’.

Following the presentations and discussions, the participants observed that:

In view of the observations, the workshop recommended that:

The participants expressed their profound gratitude to the Shehu Musa Yar’adua Foundation, Ford Foundation, Luminate and OSIWA for providing the resources for the project on ‘Contextualizing and Publicizing Real Costs & Mobilising Against Increasing Violation of Media Freedom, Journalists Rights and Freedom of Expression’, under which the workshop was held.