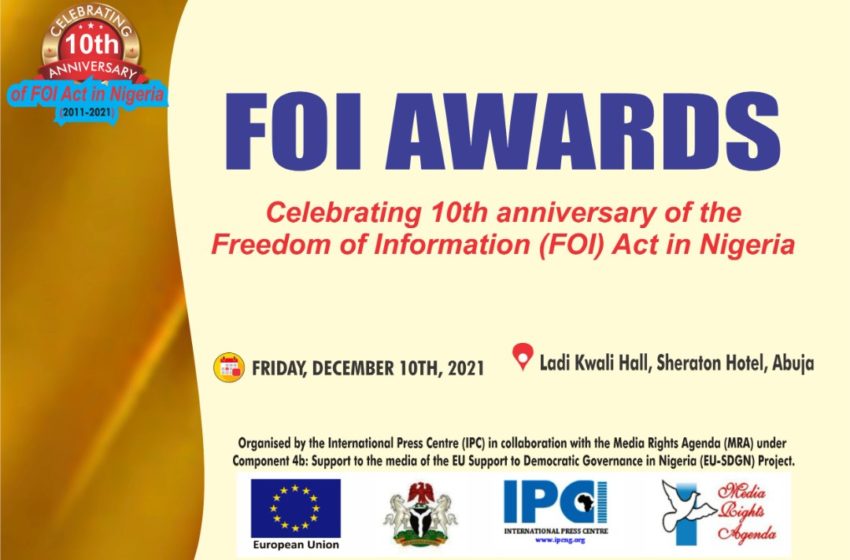 Jonathan, Fayemi, Abike-Dabiri, Odinkalu, Others for Honours at Maiden Freedom of Information Awards

Lagos, December 9, 2021, 2021: Former President Goodluck Jonathan will be conferred with a special recognition award at the maiden edition of the National Freedom of Information (FOI) Awards ceremony scheduled to take place in Abuja on December 10, 2021 for his “patriotic and courageous” act of signing the FOI Bill into Law 10 years ago, according to the International Press Centre (IPC) and Media Rights Agenda (MRA), organisers of the event.

In the joint statement in Lagos, signed by Mr. Lanre Arogundade, IPC’s Executive Director, and Mr. Edetaen Ojo, Executive Director of MRA, the organisations announced that Ekiti State Governor and Chairman of the Governor’s Forum (NGF), Dr. Kayode Fayemi, would also be honoured at the ceremony taking place at the Abuja Sheraton Hotel for blazing the trail as the first Governor to facilitate the adoption of an FOI Law at the state level.

The event, which coincides with this year’s International Human Rights Day, will be chaired by Justice Stella Anukam, a judge of the African Court on Human and Peoples’ Rights in Arusha, Tanzania.  It is being held as part of activities to commemorate the 10th year anniversary of the signing of the FOI Bill into Law by then President Jonathan in 2011.

IPC and MRA said the award ceremony, which will host government officials, former and serving members of the National Assembly, civil society representatives, media practitioners and members of the international community, among others, is intended to recognise and reward individuals, organisations and public institutions that have made significant contributions towards the advancement of the right to information in Nigeria as well as in ensuring the effective implementation of the FOI Act.

They explained that those to be honoured would include individuals and organisations that have made the highest number of requests for information under the FOI Act to public institutions or private entities to which the Act applies, between May 29, 2015 and October 31, 2021 as well as public institutions adjudged to be most responsive to requests for information from members of the public under the FOI Act and that have adopted innovative and access-friendly practices and procedures to ensure public right of access to information in Nigeria.

The Nigeria Union of Journalists (NUJ), the Nigerian Guild of Editors (NGE) and the Newspapers Proprietors Association of Nigeria (NPAN) will also receive recognition awards for their roles in facilitating the emergence of an FOI regime in Nigeria.

Explaining the rationale for the awards, Mr. Arogundade said: “The FOI Act is a progressive law enacted to open up government to the people and ensure that government becomes more transparent. It is therefore a privilege to be at the threshold of history bestowing awards on individuals, organisations and institutions that have made valuable contributions towards opening up government for the betterment of the people of Nigeria.”

Speaking in the same vein, Mr. Ojo said: “In the past, we have sought to name and shame public institutions for impeding the effective implementation of the FOI Act by inducting them into a Hall of Shame. I am very pleased that we are now also able to recognise and honour those making positive contributions. A notable example of this is Governor Fayemi who wasted no time in facilitating the adoption of an FOI Law in Ekiti State while most of his colleagues remained fearful of opening up governance as nearly all the other State governments were busy disavowing the application of the FOI Act to their States and continued to govern in secrecy.”